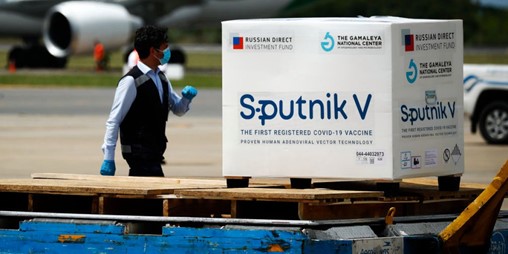 On Monday, Indian regulators approved Russia’s Sputnik V COVID-19 vaccine. Now, the state-backed Russian Direct Investment Fund (RDIF), which is marketing the Sputnik V vaccine, has plans to make the world’s second most populous country into a major manufacturing hub. “Approval of the vaccine is a major milestone as Russia and India have been developing an extensive cooperation on clinical trials of Sputnik V in India and its local production,” the RDIF said in a statement on Monday, announcing India’s approval of the vaccine. India’s Ministry of Health confirmed Sputnik’s statement on Tuesday, saying in a statement that it granted emergency use authorization to distribute the Sputnik V vaccine to individuals 18 years or older. Subscribe to Eastworld for weekly insight on what’s dominating business in Asia, delivered free to your inbox. The addition of Russia’s Sputnik V COVID-19 vaccine adds a third jab to India’s vaccine campaign. India approved and began distributing two vaccines in January—one developed by British firm AstraZeneca in partnership with local manufacturer the Serum Institute of India and the other from Indian firm Bharat Biotech. But the Sputnik V vaccine provides India with potentially its most potent weapon in the country’s battle to contain COVID-19. Sputnik V’s vaccine was developed by the state-backed Gamaleya Research Institute of Epidemiology and Microbiology and is 91.6% effective in preventing COVID-19, according to a peer-reviewed study in the Lancet medical journal. Bharat Biotech says its jab is 81% effective in preventing COVID-19 infections, while AstraZeneca’s efficacy has ranged from 60% to 90%, depending on the dosing regimen. Alongside Sputnik V’s approval in India, the RDIF also announced Monday that it will increase its vaccine manufacturing capacity in the country. The RDIF said in early April that it had brokered an agreement with Indian pharmaceutical firm Dr. Reddy’s to produce 100 million shots in the country within an unspecified time frame. After the approval, the RDIF said it expects to produce 850 million doses in India annually after striking deals with five Indian pharmaceutical companies to produce the shots. In an interview with Indian media outlet NDTV later on Monday, RDIF CEO Kirill Dmitriev said locally produced doses will go first to India’s vaccination campaign and then be distributed in markets around the world. “I think India will really become the production hub of Sputnik, serving India and other markets,” Dmitriev said to NDTV. India’s vaccine manufacturing capabilities may help the RDIF fill a supply gap it’s facing owing to strong global demand for the Sputnik V vaccine. As of February, some 50 countries had reportedly ordered 1.2 billion doses of the vaccine. But as of March, the RDIF had only produced 33 million jabs, according to the Financial Times. But meeting India’s vaccine demand alone will be a tall order, since India is dealing with a vaccine supply shortage and is in the throes of a worsening COVID-19 crisis. During January and February of this year, cases in India dipped to a low of roughly 10,000 to 20,000 per day, but a steady rise in infections since the beginning of March is showing no signs of slowing. On Monday, India confirmed a record 168,912 cases of COVID-19 along with 904 deaths related to the virus. The spike in cases pushed India past Brazil on Monday to become the second most virus-stricken nation on the planet. India’s 13.6 million confirmed cases now trails only the U.S.’s 31 million for most in the world. Indian officials have sought to stem the rising infections by ramping up vaccine distribution efforts in the country. As of Tuesday, India has administered 108.3 million COVID-19 jabs at the world’s fastest rate of 4.2 million shots per day. But India’s campaign still lags behind other major economies like the U.S. and European Union based on the share of population inoculated. India has provided at least one dose to roughly 6.9% of its citizens, compared with 36.4% in the U.S., and 15.1% in the European Union. But as India has attempted to rapidly scale up its vaccine campaign, it is now dealing with supply issues. One manufacturer, the Serum Institute of India (SII), said last week that it would not export doses of locally made AstraZeneca jabs through at least May to focus on India’s domestic vaccination drive. Still, as of Monday, one-third of Indian states were reporting that they were suffering from a shortage of COVID-19 vaccines and were turning eligible citizens away from getting jabs. On Tuesday, India’s government also announced that it would add more jabs to its supply by deviating from its “Made in India” vaccine strategy and opening the door to imports of foreign-made doses. Dr. Reddy’s Laboratories, an Indian pharmaceutical firm, confirmed on Tuesday that it will partner with the Sputnik V team to import the first doses of the vaccine after regulators gave it the green light. The company said that Sputnik V will provide a significant boost to India’s vaccine campaign. “With the rising cases in India, vaccination is the most effective tool in our battle against COVID-19,” Dr. Reddy’s cochairman and managing director G.V. Prasad said in a statement. “[The authorization] will enable us to contribute to our nation’s efforts of vaccinating a significant proportion of our population.” You just got the J&J COVID vaccine. Should you be worried about the CDC’s pause recommendation? Former President Trump’s CDC director has a new gig at Big Ass Fans Russia’s Sputnik V vaccine finally has manufacturing muscle Want to know about the future of the pandemic? Join us at Brainstorm Health 2021