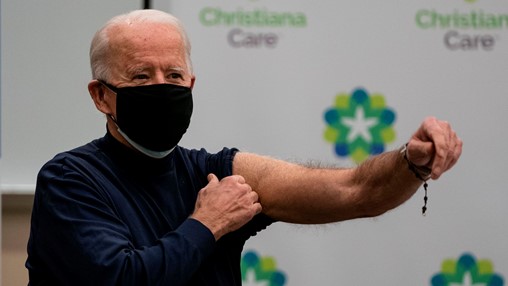 A member of President-elect Joe Biden's COVID-19 advisory team told CNBC on Monday that Biden plans to invoke the Defense Production Act to boost production of coronavirus vaccines. Why it matters: The law allows the president to direct the private sector to prioritize manufacturing in the interest of national defense. The big picture: Biden will invoke the wartime law to ensure that "personal protective equipment, the test capacity and the raw materials for the vaccines are produced in adequate supply," Biden advisor Dr. Celine Gounder told CNBC's "Squawk Box." Gounder added that under the Biden administration, the U.S. will see "a major increase" in testing to track mild and asymptomatic cases of the virus, as well as in genomic surveillance, which tracks mutations of the virus to pick up on new variants. "We did not do that routinely," Gounder said, referring to genomic surveillance under the Trump administration. "We have the technology. We just chose not to spend the money on that kind of public health surveillance." The state of play: The U.S. government has purchased 400 million doses of coronavirus vaccines from Pfizer and Moderna through Operation Warp Speed, including a 100 million-dose agreement reached with Pfizer last week amid revelations that some states would receive between 25%-40% fewer vaccine doses than originally projected. The U.S. has also secured 400 million doses of vaccines from Johnson & Johnson, AstraZeneca, Novavax, Sanofi/GlaxoSmithKline that have not yet been authorized by the FDA. Health and Human Services Secretary Alex Azar has said every American who wants a vaccine should be able to receive one by June 2021.